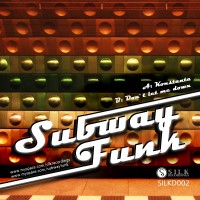 Pavel Rapinchuk hailing from Minsk, Belarus, started making music back in 1998. Back then the name of his project was just “Subway” and he was producing intelligent, jazzy jungle and easy listening. His first release was a CD entitled “Chaotic Impulses” and was for sale back in 2000. This was also the year when his track was first released on a compilation. Subway was also an active member of Belarusian (and world) demo-scene.

In 2003 he also started DJing in Minsk clubs with main focus on drum n bass. Since then he has played over 300 sets in clubs and on open air events in Belarus and the nearest countries.

Pavel still produces music, collaborates and remixes a lot (he has worked together with and artists Temax, Styx synth-pop band Shtrikh-Kot, rock-bans Dead Pilgrim and Siver and nu-jazz act Cherryvata) and these collaborations not always end in the studio: together with Temax and DSR he also plays back-2-back DJ sets and adds the sounds of live heavy guitars to drum n bass from his turntables.

After a trip to the UK in 2006, the name of the music project and DJ moniker was changed to “Subway Funk” and under this new name he made it to the top of drum’n'bass DJs in the country. With his love to drum n bass and new tracks and collaborations produced by him, he always has something for the curious ear and for the rocking dancefloor, which brings among the most requested drum n bass DJs and live acts in Belarus.

With it’s fast snare hits and chopped think breaks this liquid composition rolls quickly into a delicate dub flavored vocal. The sub bass hits low on this one and the fresh melody finds a way to hypnotize the listener into a constant state of funk.

Subway Funk – Don’t let me down

The intricate drum edits and amazing female vocal work on this tune makes it stand out from the rest with ease. With an original jungle vibe this tune flows into a deep b-line thats sure to make every club speaker rattle all night long.