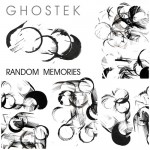 PURCHASE NOW FROM THE STORE

Square Harmony's latest release is from co-owner and the Russian producer Ghostek, who became known for his dark, moody UK Garage influenced tunes with releases on Other Heights, Shipwrec and Loveless Records.

As his more recent tunes have taken on a Techno inspired edge, Square Harmony are issuing "Random Memories" as a retrospective look at the sound that gained Ghostek a worldwide following.

The release comprises thirteen tunes, from as far back as 2010, and is a chance for fans to finally get their hands on sought-after pieces such as "Sleep Lines" and "Velvet" amongst other, as yet unheard pieces.

Random Memories" is a showcase of Ghostek's ability to merge several musical styles into a raw, atmospheric and cohesive listening experience. He takes the best of the likes of Burial, Pole and Aphex Twin to create an essential album for the autumn/winter period.

Preview: (IN ORDER OF TRACKS PLAYED)