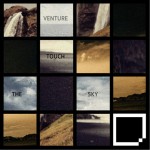 Venture is a versatile, 22-year old producer from Birmingham, UK with a strong background in creating dream-like, atmospheric pieces at a range of tempos.
With influences such as ASC and Instra:Mental and previous releases on labels such as Broken Bubble, Night Tracks, Reflect Audio and a slew of free downloads, this has seen him gain a steady worldwide fanbase.

'Touch The Sky' is a four-track release of experimental and minimal drum n' bass which come highly recommended for fans of the label Auxiliary or the producer Bop, finding an apt home on Russian label Square Harmony, which is gaining a reputation as a place willing to put out tunes of any style as long as they're interesting.

'Cassini Division' is an ambient led, spaced out tune which invokes images of the famous Rings of Saturn it is named for.

'Hard To Get' is a mournful, autonomic-flavoured piece perfectly suited to the ethereal vocals on top.

'Remote Composure' conjures up old sci-fi soundtracks, with classic futuristic synths layered over urgent, shuffling percs. Finally, 'Touch The Sky' is classic Venture, lulling the listener with deep and breathy pads and driving the tune along with his trademark flickering snares and hats.

Preview: (IN ORDER OF TRACKS PLAYED)

1. Touch The Sky
2. Hard To Get
3. Cassini Division
4. Remote Composure